Covington is a city located in Kenton County, Kentucky. As of the 2010 U.S. census, Covington’s population was 40,640, and it is the largest city in Northern Kentucky and fifth-most populous in all of Kentucky. 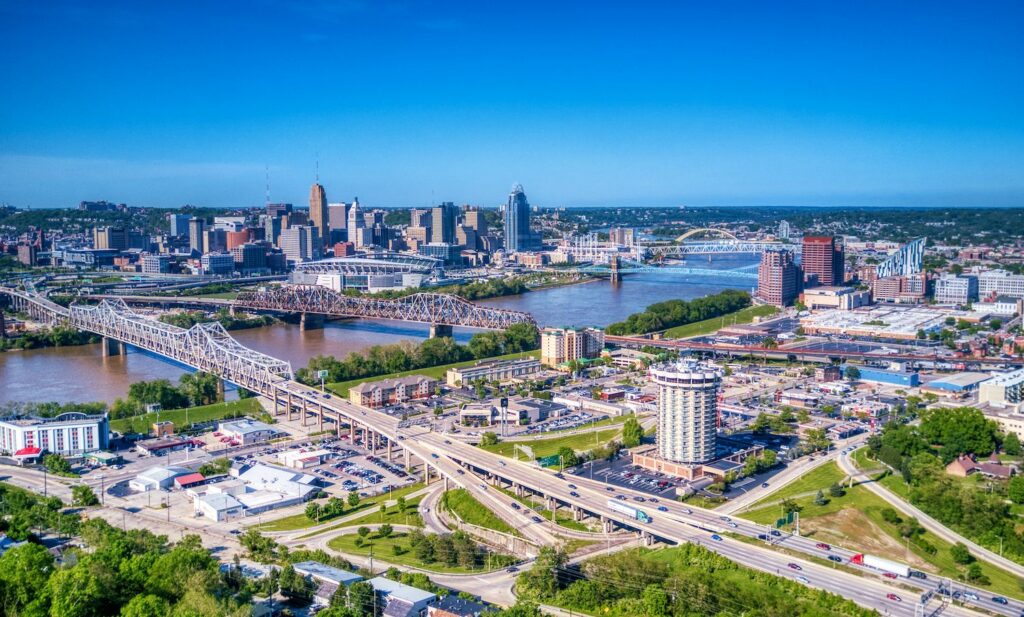 Covington is one of the two seats in its county, along with Independence. Covington is located on the south bank of the Ohio River with Cincinnati, Ohio across to its north side.

John Gano, Richard Gano, and Thomas Carneal purchased The Point in 1814 for $50,000 from Thomas Kennedy. They laid out the settlement of Covington the next year. It was formally incorporated by Kentucky’s General Assembly in 1815 and raised to city status in 1834. The city was prosperous due to the production of tobacco and cigars. In 1862, Stewart Ironworks was established and in its time made fences at a global scale. It still exists today as part of the Huseman Group in Cincinnati. There were also distilleries, glassworks, and stove factories in Covington, and its employees were largely Catholic or German immigrants from nearby Cincinnati.

Located within a climatic transition zone, Covington is nestled in the southern end of the humid continental climate and on the northern periphery of humid subtropical climate with hot summers and cool winters.

Covington is also home to Northern Kentucky’s most popular events like the First Friday Gallery Hop, Maifest, Mainstrasse Oktoberfest and Mardi Gras. It also hosts Fresh Art and The Original Goetta Festival. Convington is a vibrant urban community located directly across the Ohio River from downtown Cincinnati. Convignton is home to many of Kentucky’s premier attractions including the Carroll Chimes Bell Tower, the Garden of Hope, John A. Roebling Suspension Bridge, Mother of God Church, St. Mary’s Cathedral Basilica of the Assumption, Behringer-Crawford Museum of Northern Kentucky History and Heritage, the Carnegie Visual & Performing Arts Center, the Railway Museum, the Madison Theater, Devou Park Bandshell, and the Kentucky Symphony Orchestra. You can see the Cincinnati Reds play ball at the Great American Ballpark by walking across the Roebling Suspension Bridge, which is the prototype for the Brooklyn Bridge. Visitors can also enjoy a tour of the Cathedral Basilica, which is a 1/3 size replica of the Notre Dame Cathedral in Paris. Visitors can also listen to great rooftop jazz at Chez Nora or look at art at the First Friday Gallery Hop. Covington also has Kings Island Amusement Park, the Cincinnati Zoo, the Newport Aquarium, and the Creation Museum.