Newport, Kentucky is a quaint city situated on the Ohio River. It is the Bluegra 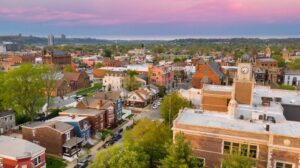 ss state’s third-largest city with a population in 2010 of 15,273 residents. The city has an area of 3 square miles, according to the United States Census Bureau. Newport, Kentucky is located in the Bluegrass region of the Upland South. It’s also commonly referred to as being located in the Midwest.

James Taylor Jr., son of James Sr. acquired the land known as Newport today from George Muse, who acquired it as a grant and settled the city in 1791. The town of Newport was not named for its position on the river, but rather, Christopher Newport. The first ship to reach Jamestown in 1607 was commanded by him. The town was established December 14th 1795 and incorporated as a city on February 24th 1834. Ft. Washington military post was moved from Cincinnati to become the Newport Barracks in 1803. The first bridge connecting Covington to Newport opened in 1853.

Newport Public Schools is Newport’s school district. Newport has one elementary school, one intermediate school, and one middle school. There’s also the private Catholic coed high school of Newport Central Catholic, which has been operating for over 100 years. Newport’s library is a branch of the Campbell County Public Library.

In 1937, the worst natural disaster in Newport occurred when a flood covered a great part of the city. In 1948, construction finished on a flood wall that still remains to this day as one of Newport’s most important landmarks.

The Newport’s White Memorial Foundation complex is home to the Newport Aquarium, Newport Music Hall, and the Children’s Museum. Scenic neighborhoods like Bellevue or Clifton Heights are full of historic homes and boutique shops. The pivotal scene in Rain Man (1988) was filmed at Pompilio’s Italian restaurant in Newport. Scenes from the Netflix original movie Extremely Wicked, Shockingly Evil and Vile (2019), showcase parts of Monmonuth Street, Pepper Pod, and Newport’s historic court house. A pivotal scene for 2011’s political thriller The Ides of March was also filmed in Newport.

Newport is in a transition zone and is close to the northern limit of the humid subtropical climate, which covers most of southeastern United States.